Michael Bröning is the Executive Director of the FES office in New York. He was previously Head of the International Policy Analysis Department at FES in Berlin and has directed the foundation in Jordan and Jerusalem.

Michael holds a Doctorate in Economics and Social Sciences and a Masters in History. He has taught Political Science at the Freie Universität in Berlin and was a John F. Kennedy Memorial Fellow at Harvard University.

Michael is the founding editor of Internationale Politik und Gesellschaft, a tri-lingual political magazine and has published seven books on European and Middle Eastern politics including “Lob der Nation” (currently in its third edition) and “The Politics of Change in Palestine”, short-listed for the Palestine Book Award. His PhD thesis on German-Israeli relations was awarded the Herbert-Wehner-Grant.

Michael is a frequent contributor to English- and German-language media, including Foreign Affairs, Politico, Die Zeit, Der Spiegel, and writes a monthly column on global politics for the Berlin-based Der Tagesspiegel. Michael has testified before the foreign affairs committee of the German Bundestag and at the European Parliament and has appeared in Foreign Policy, The Economist, The Times, BBC world, ABC Australia, 3Sat Kulturzeit, and on the German radio.

Michael is a member of the Commission for Fundamental Values of the German Social Democratic Party (SPD).

Jennifer Landt is the Head of Finance & Administration at the Friedrich-Ebert-Stiftung New York Office. She obtained a Masters of Business Administration from the University of Rostock in Germany. She is responsible for all operational and financial matters and is the leading hand in the organization of programs.

Sara Burke is the senior expert in charge of global economic policy issues at FES New York. Since 2008 her work has focused on economic policy frameworks in international financial institutions and United Nations, and the role of trade unions and other groups in civil society to hold corporations and governments accountable to international standards. She has published a number of papers on economic and social rights, most recently "A World in Protest" for the Routledge book Food Rights Food Riots. She received a master’s degree from Stanford University and a bachelor’s degree from Reed College.

Volker Lehmann is a Senior Policy Analyst with the FES New York office. His activities and publications focus on the role of the UN in international peace and security, on the nexus of peace and development, and on the various aspects of reforming the UN. He was involved in global governance reform initiatives such as the Albright-Gambari Commission on Global Security, Justice & Governance. For this commission’s follow-up book Just Security in an Undergoverned World, published by Oxford, he contributed "Natural Resources, the Extractive Industries Transparency Initiative, and Global Governance." He received a Ph.D. in political science from the Graduate Center of the City University of New York and a master’s degree in biology from the Free University of Berlin.

Lennart Inklaar is a Program and Communications Officer at the Friedrich-Ebert-Stiftung (FES) New York office. He handles the office's outreach and communications as well as organizational and programmatic elements of a wide variety of FES projects and activities, including preparation, implementation and follow-up. Lennart holds a master's degree in International Affairs from The New School in New York and a bachelor’s degree from the University of Groningen. 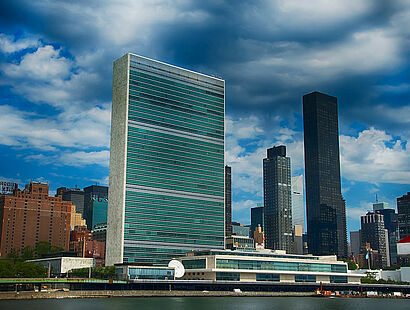 Our Mission in New York

The Friedrich-Ebert-Stiftung (FES) office in New York serves as a liaison between the United Nations, FES field offices and partners in developing countries to strengthen the voice of the Global South. More