Ten years after the last financial crisis, large banks are still creating risky financial instruments faster than policymakers can regulate them, and bank workers around the world are under pressure to sell these products. 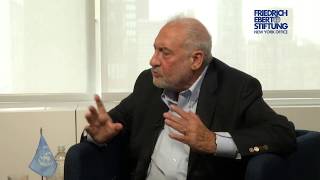 Debates abound over regulatory oversight of large banks and the best methods of safeguarding consumers and economies. Yet little attention has been paid to the role the nearly eight million commercial bank employees in the global banking sector might play.

On April 4-5 at the World Presidium and Steering Group of Finance Sector Worker Organizations in São Paulo, Brazil, UNI-Finance launched a global campaign to make their affiliates aware of the importance of workers, unions, and collective bargaining for making the financial sector more sustainable and inclusive at both national and global levels. Instead of relying on legal and supervisory systems to take on the entire task of financial regulation “from above”, this campaign is about building support among unions, interest among academics and awareness in international financial and regulatory bodies, for how collective action by finance workers might change the culture of banking and finance “from below”.

This 1-day strategy session – which took place on the sidelines of the United Nations’ (UN) annual High-level Political Forum (HLPF) in which UN Member States review progress toward achieving the Sustainable Development Goals (SDGs) that make up the Agenda 2030, the UN’s first ever universal development agenda – was co-organized with partners from AFL-CIO, the Kalmanovitz Initiative for Labor and the Working Poor at Georgetown University and the Rutgers University School of Management and Labor Relations. It brought experts in financial regulation and corporate governance from academia and the UN system together with representatives from trade unions and select civil society organizations.

The objective of the meeting was to create space for a discussion in which trade unions and their allies can be informed by UN experts and share analysis and experiences of regulatory and UN-based corporate governance initiatives, such as the UN Global Compact, in order to best prepare their campaign for upcoming multilateral dialogues.