While there is a growing consensus among civil society and States of the need for bridge building within the NPT on the issue of nuclear disarmament, it remains so far mostly unclear what this could look like in practice.

The NPT and the multilateral nuclear disarmament and non-proliferation architecture are at risk. The current NPT review cycle, culminating in the Review Conference in 2020, is characterized by rising nuclear risks, among them deterioration of US-Russia relations, the demise of the INF Treaty, the possible non-extension of the new START, nuclear weapons modernization programs, the volatile situation in Northeast Asia (despite current dynamic developments), the potential collapse of the JCPOA and the Middle East issue. In the NPT context, there is also a high degree of polarization on the issue of nuclear disarmament. Much of this polarization has manifested itself in recent years in contentious discussions on the Humanitarian Initiative and the subsequent adoption of the Treaty Prohibiting Nuclear Weapons which were pursued due to the limited progress on nuclear disarmament. Undoubtedly, these divisions on nuclear disarmament have a corrosive effect on the NPT-based regime, which is already challenged on so many other fronts.

While there is a growing consensus among civil society and States of the need for bridge building within the NPT on the issue of nuclear disarmament, it remains so far mostly unclear what this could look like in practice. Even the very concept of bridge building has become contentious in the NPT. Nevertheless, a more inclusive dialogue with the aim of better understanding the different positions and trying to identify concrete policy steps that could command broad support would be beneficial to reinforce support for the NPT and be important in view of the 2020 Review Conference. A number of different initiatives have been taken in recent months to address the nuclear disarmament bridge-building challenge for the NPT.

The panelists are involved in several of these initiatives. The aim of the event was to present the different approaches to bridge building on nuclear disarmament and discuss possible ways on how such efforts could overcome some of the disarmament divide in the NPT. 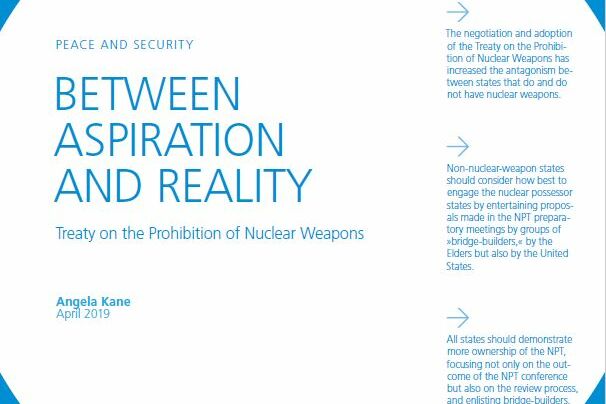 Between Aspiration and Reality

As Member States are gearing up for the 2020 NPT Review Conference, consensus remains difficult to achieve.