The challenges of financing for development (FFD) are many - from a weakened multilateral system to persistent inequalities - but the key for UN delegates negotiating the outcome of the upcoming FFD Forum? Focus not only on the need for economic growth, but on who will benefit from it.

UN Member States began informal negotiations this week on the outcome document for the 2018 ECOSOC Forum on Financing for Development (yes, they write the outcomes in advance). The delegates’ deliberations are informed by the recent release of an inter-agency report, “Financing for Development: Progress and Prospects 2018,” that incorporates data and analysis on a huge set of commitments and actions for development finance involving over 50 UN agencies, funds, and programs, as well as some other offices relevant to international finance, including the OECD and the Financial Stability Board (FSB). The draft outcome under consideration draws from this report, which applauds the past year’s upturn in the world economy but downplays risks to the global order – like the looming threat of full-on trade war and other fissures in the multilateral system – any of which could prove disastrous for development.

The Progress and Prospects report highlights that – for the first time since 2010 – all major economies are growing, which is a cause for some celebration, as most of the reduction in global poverty since 2000 has been due to growth. (Note, in the “Elephant Chart” above, that rising incomes in emerging economies, particularly China’s, are seen in the vast, rising curve of the elephant’s back.)  However, redistributive policy frameworks are sorely needed to make real headway against poverty.  Otherwise, as last year’s report cautions, key elements of Sustainable Development Goal (SDG) 1 – “End poverty in all its forms everywhere” and “Leave no one behind” – don’t stand a chance. In that bleak scenario the poorest of the poor in the elephant’s tail will continue to suffer greatly.

Wage growth and the redistribution of income and wealth are also needed to reverse the political impact of inequalities – both within countries and between them – and the perception (which is also a reality) that globalization has left many groups behind. This perception, in turn, has fueled inward-looking policies and geopolitical tensions, particularly emanating from the squeezed bottom 90 percent of the populations of the US and Western Europe, who are represented in the low-hanging part of the elephant’s trunk. The scale of the challenge all this presents for development finance within the present multilateral system – weakened as it is by the pernicious political impact of unchecked inequalities – is truly elephantine.

The consequence of ignoring this beast could be that the Financing for Development Forum becomes an exercise in surrealism instead of a vehicle for international cooperation, because, despite the adoption of the Addis, Paris, and 2030 global agendas, we still don’t have a clearly defined approach to coordinating them. The result? International cooperation is on life support:

In conclusion, the challenge facing UN Member States is how to strengthen FFD and make progress on the global agendas within a weakened multilateral system.

Some ways forward may require looking backward, to the origins of the Financing for Development process, whose Monterrey Consensus was the first-ever FFD outcome document. “Monterrey” was a product of the landmark International Conference on Financing for Development held in Monterrey, Mexico in 2002, with the participation of over 50 heads of state and 200 government ministries.

Monterrey’s strength was convening the necessarily broad set of actors and institutions required to craft a coherent, holistic, and pragmatic package of policy actions to finance development. A wide range of government ministries (foreign, development, economy, labor, and finance) came together for a conference that was truly international because it demonstrated the engagement of the heads of the institutions that became stakeholders of FFD: the International Monetary Fund (IMF), World Bank Group (WBG), World Trade Organization (WTO) and of course, the United Nations (UN, especially the UN Department of Economic and Social Affairs [UN DESA], UN Development Programme [UNDP], and UN Conference on Trade and Development [UNCTAD]).

This was a huge step forward from the decades-long status quo in which the main victors of World War II concentrated global policymaking in bodies they could control: for global security, via the veto in the UN Security Council, and for the global economy, via weighted voting arrangements at the IMF and World Bank, which took matters out of the UN General Assembly and ECOSOC, whose Member States each had a vote.  Due in large part to this division of labor between “serious finance” and “development,” in the ensuing years since 2002, and, despite the fact that FFD held international conferences in Doha in 2008 and in Addis Ababa in 2015, FFD became more and more sidelined as a UN-centered process of minor importance to the other institutional stakeholders. However, this has begun to change due to the universality of Agenda 2030 and related efforts of the Inter-Agency Task Force on Financing for Development, whose 2016, 2017, and 2018 reports have involved the secretariats and development finance data of all the institutional stakeholders.

The elephant in the room is very large, but progress toward international cooperation can still be made:

When we see the elephant in the room, and really look it in the eye, we see more than just growth. More importantly, we see who benefits from growth – and who does not. 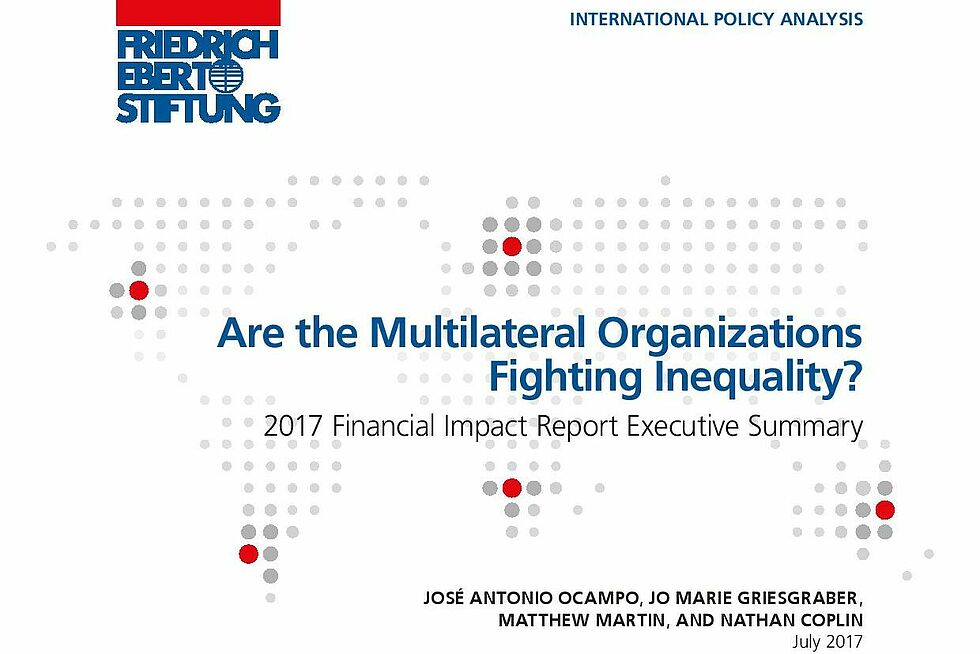