The first-ever virtual HLPF was a disappointment, both substantively and organizationally.

Since 2016, the High-level Political Forum (HLPF) has been the annual get-together for UN Member States, UN experts, and civil society stakeholders to review progress on the Agenda 2030 and the Sustainable Development Goals (SDGs). This year’s HLPF was the first-ever fully virtual meeting, and from Tuesday July 7, 2020 to Thursday July 16, 2020 online discussions addressed the theme “Accelerated action and transformative pathways: realizing the decade of action and delivery for sustainable development.”

At a time when the UN is facing the most profound global health and economic emergency in its entire history, the HLPF attracted heightened political attention. Unfortunately, this first virtual HLPF was a disappointment, both substantively and organizationally. It was a missed opportunity that cast a shadow over the future of the Agenda 2030 and also over the upcoming high-level week of the UN General Assembly in September, when UN Member States will gather – again mostly virtually — to commemorate the 75th anniversary of the UN and to recommit to the spirit of global cooperation.

The virtual format of the HLPF did not help Member States to achieve practical solutions. Commitments were not followed through and actions were not taken. The usual opportunities for informal person-to-person talks in the corridors and for entering into partnerships and joining forces were not available because of the virtual nature of the meeting.

During the so-called “high-level segment” of the first week, 47 countries delivered their voluntary national reviews. The majority of presentations were pre-recorded videos and many comments and questions were curtailed or eliminated. The second week had even more technical challenges – and no translation.

According to the UN, the HLPF had a record number of 90,000 participants following the various events online. However, these numbers do not reflect an increase in meaningful civil society participation. On the contrary: in total, only 38 stakeholders from civil society were allowed to connect to each session. In earlier HLPFs, over 4,000 stakeholders registered to participate.

Still, the HLPF could have been an example for an effective UN where Member States reflect on how to solve the problems of putting the 2030 Agenda into practice. In recent years there has been uneven progress on the implementation of the SDGs. There has been forward movement towards gender equality, access to energy, increased labor productivity, and decreasing unemployment. Other goals and targets such as extreme poverty and child mortality have continued to show improvement and some infectious diseases have been reduced, but progress has remained slower than expected. Overall, even before the COVID-19 crisis hit, Member States were not on track to achieve these goals. The road ahead is now even steeper than before, while, at the same time, in reaction to the Covid-19 crisis, delivering on the 2030 Agenda has become more, not less, urgent.

Lastly, Member States were unable to agree on a Ministerial Declaration at the time of concluding the HLPF (but may do so at a later stage), although the draft indicated that this would have probably been the least ambitious Ministerial Declaration that the HLPF has ever produced. Several countries broke silence procedure on the draft as disagreements arose on paragraphs related to climate change to funding issues.

While the absence of unanimity is unprecedented for the HLPF, it was yet another example this year of multilateralism being questioned. Previously, some of the large countries had delayed discussions on the pandemic in the UN General Assembly and the Security Council. Instead of a commitment by the international community to follow the SG’s call to ‘build back better,’ the draft Ministerial Declaration only recognized “the efforts and measures proposed by the Secretary-General concerning the response to the impact of the COVID-19 pandemic,” which signals strong dissatisfaction.

Nevertheless, the SDGs remain the single most ambitious set of goals that humankind has ever produced collectively. They were valid at the time when they were written and they also mandate a commanding comprehensive response to today’s pandemic. If the 2030 Agenda fails, the UN will fail.

The disappointing outcome of this year’s HLPF therefore also has a number of political implications for the opening of the General Assembly in September. The pandemic has put global cooperation and the UN to the test on the eve of the UN’s 75th anniversary. The mostly virtual format of that meeting will also bring new challenges, but the potential of virtual meeting technologies can also be harnessed for expanding, not limiting, the global debate. In September, Member States need to step up, unite, and truly commit themselves to transforming and revitalizing the UN. Otherwise, ventilators may not be enough to prevent further deterioration not only of the Agenda 2030, but also the UN itself.

*This article was written in the author’s personal capacity and does not reflect the view of the organization. 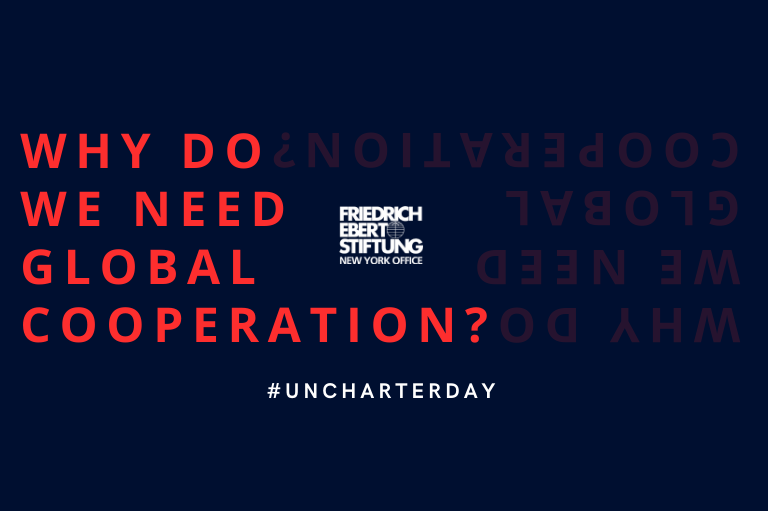 Learn more about why we need global cooperation - now and in the future!