A conversation on the "Veto initiative" with the Ambassador of Liechtenstein to the United Nations, Christian Wenaweser.

FES New York: Liechtenstein has just initiated a resolution that mandates a meeting of the U.N. General Assembly whenever a veto is cast in the Security Council. What’s behind this initiative?

Ambassador Wenaweser: The veto initiative is a simple idea, but we think it politically very meaningful. It simply says every time there is a veto cast in the Security Council, there is automatically a meeting convened by the General Assembly to discuss the proposed veto in the Security Council. It's an automatic mandate, not subject to any further intervention or decision,  given to whoever is the president of the General Assembly at that time. A meeting is to be convened within a set timeframe. It is open-ended with regards to the outcome, completely non-prescriptive. The only thing that is mandatory is the meeting and the discussions themselves.

Could you elaborate on the motivation for this initiative? Why is this happening now?

Amb. Wenaweser: We're doing it because we believe in strong multilateralism. We have followed with growing concern the inability of the Security Council to take effective action on threats to international peace and security due to the very deep political divisions among the permanent members in the Council. This has a strong negative impact on the effectiveness of the United Nations and its public perception. If you look at our national statements in the last five years or so, we have consistently advocated for a strong role of the General Assembly in matters of international peace and security as mandated in fact by the Charter of the United Nations. This initiative is a meaningful step in that direction.

The reason why we're doing it now is twofold. We were close to launching this initiative in March of 2020 when we were hit by the lockdown. This is not the type of thing that we can do online, so we decided to postpone this. The lockdown is over, so we are ready to go now.

Is there a reason why you do not mention the R word in this context? Russia.

Amb. Wenaweser: If you look at the vetoes in the past few years, it's clear who has vetoed by far the biggest number of resolutions: the Russian Federation, mostly with regards to Syria. But our initiative is not aimed at Russia or directed against Russia. It's simply about the veto and it's about the institutional balance in the UN system. It's about the role that we believe the General Assembly should play in this organization.

What are the chances for this resolution being adopted?  There was some speculation that it is going to be discussed this week and there's going to be a vote in the coming days.

Amb. Wenaweser: The vote is not this week. This week we will have a formal presentation with the membership. We will then look to get a date in the General Assembly soon thereafter. Hopefully still within this month. We are getting a strong positive response to our initiative and are very confident that our text will be adopted.

Are you concerned that the initiative if adopted could be used as a political tool to put other countries who have veto powers on the spot?  Or that countries that are put on the spot in the General Assembly because of a veto then go on to use the debate in the Assembly to generate even more attention for their view than they would have gotten only on the Council?

Amb. Wenaweser: Our resolution does provide that the delegations that vetoed in the Security Council are offered the first slot in the speakers list because we would like to hear from them why they vetoed, why they think it's in the interest of the organization, why they think it's compatible with the purposes and principles of the Charter. That's an invitation extended to them and, as is the case with any invitation, you can accept it or not.

The veto initiative is not about putting anyone on the spot, it is about accountability.  It's about being given a voice in what we think are issues of which we have ownership. The Charter of the Unite d Nations says clearly that the Security Council does its work on behalf of the membership – when it is prevented from doing so using the veto, we want to discuss this.

Are you surprised that your initiative is receiving support from Washington at this point?

Amb. Wenaweser: You have probably seen the statement of my U.S. colleague in New York, it states the reasons the U.S. have very clearly. We think what they are saying is very important as it is coming from a permanent member of the Security Council which has not always had an easy relationship with the UN in the past. This U.S. administration has supported a big step for the Security Council to invoke the Uniting for Peace procedure in connection with the Russian aggression against Ukraine. We are very grateful for their support and read this as a strong commitment to multilateralism.

Also, if we understand you correctly, it's not a vote on Russia.

Amb. Wenaweser: Not for us. Some observers obviously think we are doing this because of what's going on in Ukraine. That's not true, as the timelines of our initiative indicate.  But of course, the aggression against Ukraine and the deadlock of the Security Council due to the veto power makes it abundantly clear that our initiative is the right thing to do.

Have you received any reaction or any formal response from Russia on this?

Amb. Wenaweser: What do you mean by formal response?

FES New York: Well, it could be a tweet, or it could be a phone call at 4:00 a.m. in the morning.  We'll leave the interpretation to you.

Amb. Wenaweser: I usually try to be asleep at 4:00 in the morning. So, I may have missed that call. [laughs] But no. We have of course engaged with our Russian counterparts on this initiative in the past, but not recently.

Regrettably, sometimes UN initiatives come in with some momentum but then unfortunately nothing is really coming out of it once they are adopted. The Mexican-French initiative to voluntarily restrain the use of the veto in the Council after the blockage of the Council in 2013, for instance, comes to mind. Are you concerned that this could happen once again?

Amb. Wenaweser: No, I am not – and I wouldn’t agree with that assessment. After all, the French-Mexican initiative as well as the ACT Code of Conduct – for which we were the penholder by the way – are initiatives that create political commitments for those who embrace them – they were never intended for formal adoption in the GA.

This will be a General Assembly resolution, creating an intergovernmental mandate that the General Assembly creates for itself and for perpetuity. It will be implemented automatically, and it will make a difference.

This interview was conducted by Michael Bröning and Volker Lehmann. 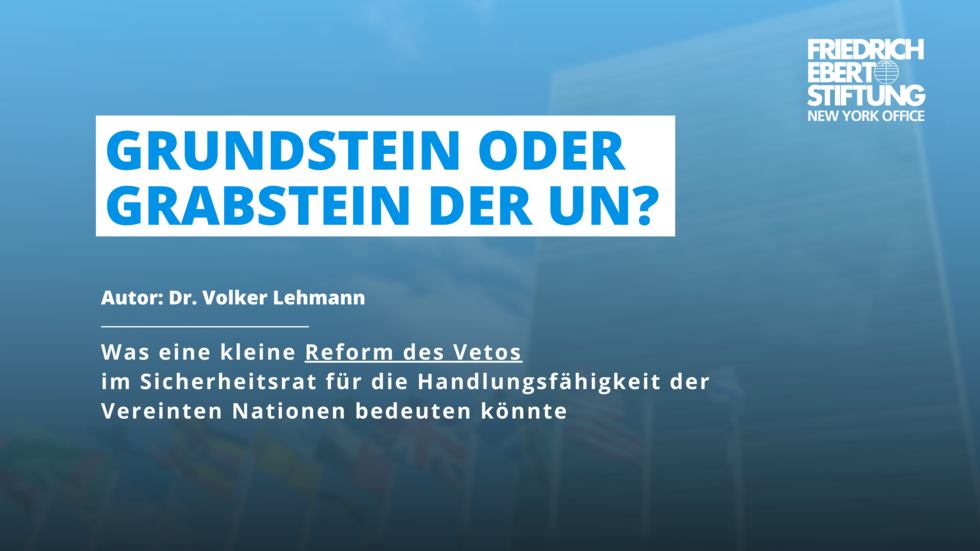 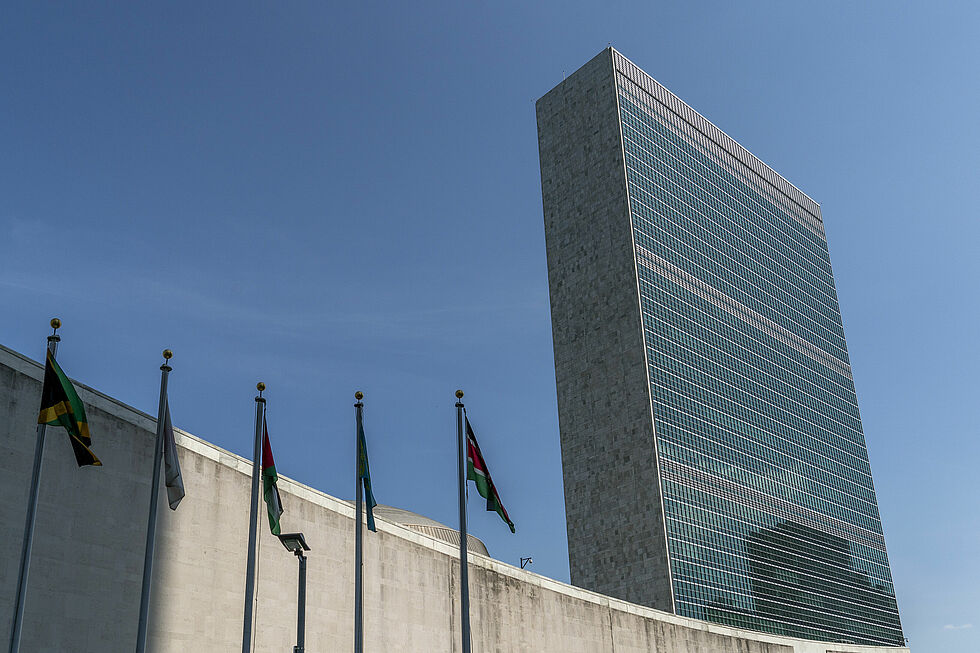 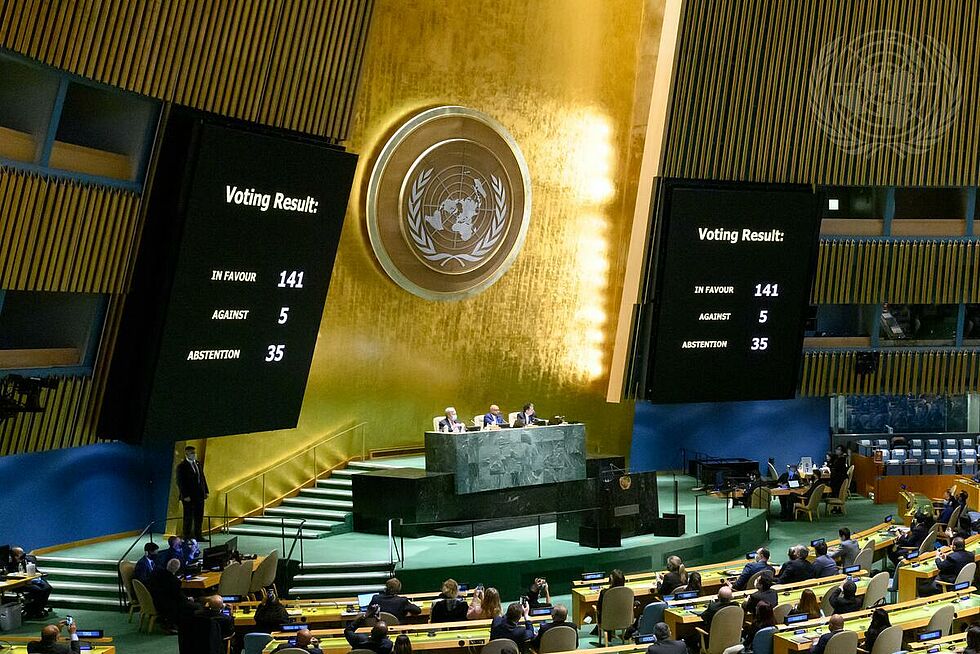 In a historic vote, the UN General Assembly demands an end to Russia's war against Ukraine. Michael Bröning reports in "Vorwärts" (DE).