The Universal Declaration of Human Rights at 70: A critical partner to the atrocity prevention agenda

On December 10th 2018, the Universal Declaration of Human Rights (UDHR) will celebrate its 70th anniversary after its initial passage in Paris, France in 1948. There is another UN international convention that will also reach 70years of age this year – although possibly to less fanfare – the Convention on the Prevention and Punishment of the Crime of Genocide (the Genocide Convention) which was passed just one day earlier, on December 9th 1948.  While to the outside observer this may seem a coincidence, it is in fact very fitting that the Genocide Convention was the first human rights treaty adopted by the General Assembly[1] and that, combined with the UDHR, these represent two of the very first acts of the United Nations to reinforce a global system that protects human rights.

The Genocide Convention and the Universal Declaration of Human Rights were landmark achievements. In the case of the Genocide Convention, its passage in 1948 created an international convention on the prevention of a crime that just five years earlier did not have a name and was not yet considered an international crime. Meanwhile, the UDHR established, for the first time, “fundamental human rights to be universally protected,”[2] which laid the foundation for international human rights law.[3]

Human Rights Violations as an Indicator for Atrocities

Atrocity prevention and human rights promotion are inextricably linked. A key indicator for potential future atrocities is the systematic violation of human rights such as those guaranteed in the UDHR. This relationship has been affirmed at various levels throughout the international community. An example of how this link is recognized and acted upon at the global level is the United Nations Human Rights up Front initiative, which was created in 2014 to address the failures of the UN system to prevent the mass killings of civilians in Sri Lanka in 2009. This initiative provided the infrastructure for UN staff to “take a principled stance and to act with moral courage to prevent serious and large-scale violations.”[4]

This essential link has also been recognized through state policy at the national level. In 2017 Germany released a policy paper entitled “Federal Government of Germany Guidelines on Preventing Crises, Resolving Conflicts, Building Peace.”[5] This document, created through an intensive inter-ministerial consultation process, highlights as a key component of Germany’s conflict (and atrocity) prevention strategy the prevention of severe violations of human rights, as well as the defense of minority groups and those suffering oppression and persecution.

The role of human rights in atrocity prevention has also been incorporated into the early warning and risk assessment tools used for predicting the onset of identity-based violence.  For example, the Director of Academic Programs at the Auschwitz Institute, Dr. James Waller, has conducted a comparative analysis of multiple existing risk assessment tools to determine the most significant factors for predicting future atrocities. Through this analysis, Dr. Waller found unequal access to basic goods and services, gender inequalities, systematic state-led discrimination, economic discrimination, and a record of serious violations of human rights as key leading indicators that put a given society at risk.[6] Considering an additional model, the United Nations’ Framework of Analysis for Atrocity Crimes also notes the lack of access to justice for victims, the existence of discriminatory and exclusionary policies between groups, the denial of a group’s existence, and a lack of access to participation in decision-making processes as further warning signs.[7]  The basic rights flagged in these risk assessments are enumerated throughout the entire Universal Declaration of Human Rights, most notably in Articles 5, 7,8, 9, 15, 18, 19, 20, 21, 26, and 27.[8]

Sadly, we have witnessed the systematic violation of human rights precede the commission of atrocities in multiple societies across generations. From the economic discrimination experienced by Jewish businesses in Germany in the 1930s to the identity-based polar factionalism in Bosnia and Herzegovina in the early 1990s, to the history of human rights abuses on the Yazidi community in Iraq, to the denial of access to education, nationality, and basic services for the Rohingya in Myanmar, this pattern has continued.

The deep understanding of the link between the protection of human rights and atrocity prevention also presents an opportunity. In her policy brief, “Building Resilience to Genocide,” Dr. Deborah Mayersen highlights that while the violation of human rights is a risk factor for atrocities, the promotion of human rights can build institutions and societies that are resilient to genocidal pressure.[9] Indeed, there are positive examples of this approach being implemented in different states around the world. One such example is the Latin American Network for Genocide and Mass Atrocity Prevention.

Established in 2012, the Latin American Network is a forum for regional cooperation on genocide and mass atrocity prevention, which consists of eighteen participating States throughout Latin America. Through their participation in the Network, members have prioritized the prevention of atrocities through their human rights work in the development of their public and foreign policies.[10]

There are historical reasons for this regional expertise. During the transition to democracy, following a period marked by oppressive dictatorships, a number of Latin American States took a leading role in developing structures and institutions dedicated to the protection of human rights. This has manifested itself at the national level through governments establishing Secretariats for Human Rights, Offices of Ombudspersons, and Human Rights Offices within Ministries of Foreign Affairs and Defense, as well as at the regional level through participation in human-rights-based regional fora. Recognizing the close link between the human rights and atrocity prevention agendas, at its founding the Latin American Network established as its key pillars:

Progressively, the Network and individual participating states have implemented prevention initiatives built upon the protection of human rights. For example, the national police force in Chile, the Carabineros, have developed mandatory training for its officers related to human rights and the application of the use of force to prevent mass atrocities. Uruguay and Bolivia have prioritized the protection of the LGBT and indigenous populations as a way to reinforce human rights protections for vulnerable communities. Finally, Argentina and Honduras have cooperated in organizing a series of conferences between relevant government human rights offices dedicated to developing tools for the implementation of a national action plan for combatting discrimination with a long-term focus on atrocity prevention. In many spaces in Latin America, the relation between human rights and atrocity prevention is a vibrant and fertile one, asserting itself in new ways that the respect for each person’s dignity is a cornerstone of atrocity prevention.

Despite this progress, however, on this 70th anniversary of the Universal Declaration of Human Rights we must also recognize that the systems that reinforce these protections are under attack.  Numerous human rights and atrocity prevention organizations are increasingly and legitimately concerned about the reduction of human rights capacities, which simultaneously serve an atrocity prevention function. This has been exacerbated, particularly at the United Nations, by the US retreat from sustained support for human rights advocacy, along with pressure from China and Russia to further reduce opportunities for such advocacy. A case in point is the aforementioned Secretary-General’s Human Rights up Front initiative. Human Rights up Front has been shrinking in recent years under pressure from certain Member States seeking to downgrade the initiative within the UN system. A further alarming case is that of the Russian-backed Chinese push to reduce or eliminate the human rights components of peace- keeping mandates. According to information emerging from 2018 budget negotiations, China was seeking to eliminate funding for human rights experts in the Central African Republic, South Sudan, Mali, and the Democratic Republic of Congo, all societies with high levels of risk for atrocities. States that are committed to the UDHR and its link to atrocity prevention will have to pressure the Security Council and the UN infrastructure to reverse this trend and to continue to affirm the inextricable link between atrocity prevention and human rights protection.

In November, the Friedrich-Ebert-Stiftung New York office and the Auschwitz Institute for Peace and Reconciliation published our policy paper entitled “Making ‘Never Again’ a Reality: What Germany can contribute during Its Next Term in the Security Council toward Preventing Mass Atrocities.”[11] In it, we provide a series of recommendations for the German government related to advancing the atrocity prevention agenda. Figuring prominently among these recommendations is reversing the attacks on the human rights systems within the UN and making better use of relevant human rights instruments such as the High Commissioner for Human Rights and the Special Rapporteur on the Promotion of Truth, Justice, Reparations, and Guarantees for Non-recurrence. Reversing this concerning trend will require the support of the international community, regional organizations, states, and civil society organizations to leverage their respective capacities for strengthening human rights instruments.

On December 10th, we will celebrate the 70th anniversary of the Universal Declaration of Human Rights. We should celebrate this Declaration for the guidance it provides to the international community for building societies that are defined by their respect for human rights and also for the critical role human rights play in the prevention of atrocities. However, we should also consider what celebrating this Declaration means in practice. We should  recognize that it is not about rhetoric but about action, and double our efforts to fight its devaluing and degradation at every step while we continue to push for its implementation everywhere.

[7] United Nations (2014): Framework of Analysis for Atrocity Crimes: A Tool for Prevention; available at:
http://www.globalr2p.org/media/files/framework-of-analysis-for-atrocity-crimes_en.pdf

[11] Making »Never Again« a Reality What Germany Can Contribute during Its Next Term in the Security Council toward Preventing Mass Atrocities - http://library.fes.de/pdf-files/bueros/usa/14864.pdf 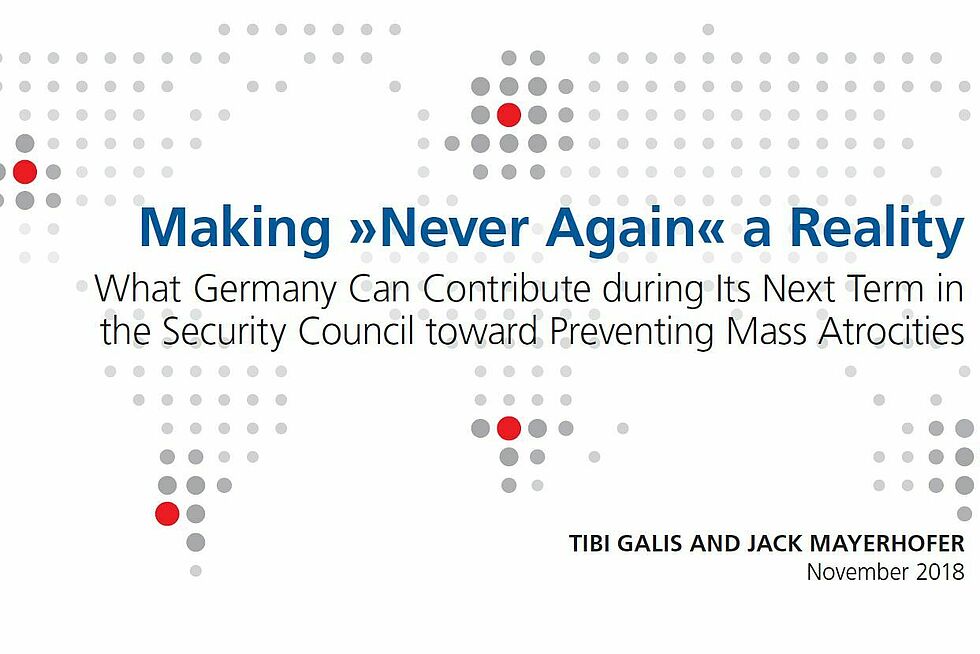 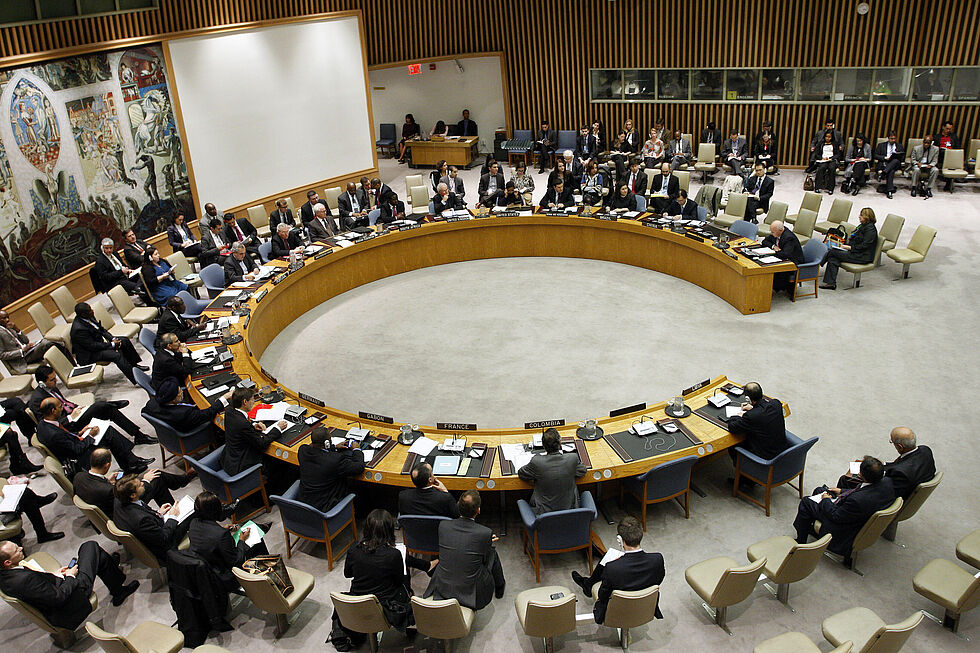 Germany's term on the Security Council brings both an opportunity and an obligation to honor its history by advancing atrocity prevention.